Just a year after we were served with Notice to Quit by Newham council, so moved here, I cracked up and went mad.

The planetrees must know madmen, madwomen -
Planted a century ago. November’s
Sun blazes embers
Redly through eye corners; “You too
Are human, even if you’re mad”, sun says.

As do the planes. Perhaps psychosis
Makes one’s fright of oneself worse?
But the planes line the avenue stiffly, obstinately:
“This is humanity” they say,

There’s no apology, there is routine.
Sunset’s red, redder than nervous terror
Don’t be afraid, alone:
Blow up the crisp-packet of dark id
Clap it smacked! Death is that bit further

Off. Planes root in the present and insist on happiness. 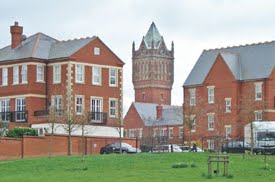 Going out to the pub used to be nice.

A soap bubble, dark and spongy, brittle
She must assert herself against their looks

Eyes smarting soapy pain. Not telling anyone.
Is her dark-windowed boredom quite complete?

No, not quite. It is pointing out those twenty
Sparrows with tea-brown wings and thistledown buff breasts

Which flicker and toss dust in dust baths.
A local turning, tyres have churned its floury earth,

It’s put to local use by birds at dusk;
As the air empties after working hours.

She points, urgent as drops of blood alive and glistening
Caught in the hair of the self. She indicates

The droughts of space, the sparrows sloughing grease
From tiny quills. She is alive and ill, her life’s her illness. 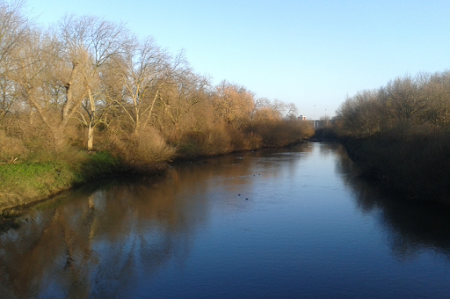 Actually this bit of the Lea is in Newham. Back when we moved here the marshes were wilder and much messier, run to seed in all directions and unkempt.

ALICE IN THE MARSHES

Powerful ideas exercise duress;
None’s worse than Godlessness.
The receptive brain stammers its anguish
Through working hand and looking eye,
Must rationalise. Does so by deciding to pick blackberries.

The marsh resounds with living insects, flowering reeds,
Its noise a hush, its sunny nothingness thickly overgrown.
Full of her rationalisation, Alice came.

She had a plastic bag and a primary purpose.
Despairingly she trampled reeds, trampled the belled
Hairy comfrey, breathed, wiped purple-dark
Reed flowers off her mouth, and spat bits out.
Thorned spines sprang in her grasp and ripped her hands
She licked off her hot blood, and thistles
Brushed at her legs and caused pain destructively.
She was so alone, the flowers fought back, she stamped them down.

The duress of Godlessness
Reinterpreted the hush,
Squashings of stems, jerkings of thorns,
Brushings of Alice’s clothes, the noise
Where her plastic udder of blackberries
Scraped and plucked. Her vulnerability
Coloured her fear of that one idea, informed her breath,
The horizons were bloodred confines, Godlessness meant death.

Telling herself she was satisfied because she’d blackberried
Alice sat down on her dancefloor of burst reeds
Shrugged a tin from the four-pack, broke
Its opening and drank.
Telling herself she was satisfied by work done
She tried to make this a happy occasion, but
A huge and Godless moon
Rimmed her bare shoulders. Alice stared straight ahead
Drank more determinedly, lit a cigarette.

The High Street ward officers of the local Labour party drank in our local pub after meetings, my husband was one. One night I flipped, lost my temper and challenged an informal group of party officers, here is a dramatised account. The Alice character is yours truly, the Cathy character a necessary invention, a spear carrier i.e. she’s needed to make the drama work.

“Who is that in the corner, glaring,
A big strip of adhesive tape across her mouth?”

“That’s Alice. Shake hands nicely, Alice. The tape?
It’s bad enough having to see her face work, not have to hear
Her babble showing us all up. Alice “suffers from her nerves”
Alice squirms, red-faced,
Cathy pauses, this is weird. Their eyes meet.

But Bolt has produced the latest party newspaper, Frog
Solemnly reads the important article while Bill and Herrick
Talk initialese and party politics right across Alice. Cathy feels uncomfortable
But everyone else accepts it. A banner headline screams
“Tory Lunacy!” “This policy is insane” says Bob

Alice stares - Alice suddenly snatches
The party newspaper - her hands are free - she rips
The bandage off her mouth and simply shouts:

“That headline screams my illness as abuse! Do you think I like
Being mad? When you think THIS of madness?
When you use terms like nutter, schizo, to my face?”

Frog, Herrick, Bill and Bolt fall flushed, uncomfortable and silent.
Alice is making an embarrassing scene. They shift their feet,
Won’t meet each other’s eyes. Cathy hustles Alice outside,
People in the pub are staring. Outside, earth shifts
Beneath moonlight. Alice is desperate, “I won’t have this abuse!”

Her madness is infectious, Alice breathes, breathes hard
Cathy is struck by recognition, this rage is human.
Alice is a real person! The atmosphere is darkling yet,
the heavens unperturbed.
...
...
...

Yep, my angry idealistic accusations met red disgusted faces. To a man they pretended it wasn’t happening - in those days the idea of Supermen flinging on their capes and zooming to sustain and champion poor mentally ill underdogs was laughable. For God’s sake, one needed to discriminate between the right sort of suffering poor, and the very wrong buffoons like schizos, that sort were a waste of right thinking people’s time.

Silenced, and infuriated, I did another dramatisation, this time of a wishful sort of tour of Walthamstow rough-sleeper spots. It was driving me mad all over again, nobody seemed to get what I meant at all, or understand that lunatics like me are also human people.

OUR EXPERIENCE OF HER MADNESS

Our experience of her madness starts when Alice shuts
Us out, outside our own front door, and doesn’t leave it on the latch!
She takes us into a darkness where every doorway recess
Holds rubbish, in bags or worse, human rubbish wrapped in old clothes.

She must be mad! Why doesn’t she explain? Make things honied, come right?
Alice is speechless. A barb’s thrust in, it curbs her tongue -
Look! Like a blackberry rambler thorn - it’s made it bleed,
She;s put us on the spot - kiss her dumbed tongue better? Pull the barb out?

Alice indicates, again, the human rubbish, dumped in archways, recesses,
These have no history, nor meaning now. Hospitals, and God-in-us
Have shut them out - shut out like us - now they curse, curse us, frighten
Us by seeming to expect shelter! Money! Food from us, even medicines!

This experience is hateful! - How we hate having it forced into our notice!
It’s never on the News, nor mentioned in the policies of either party.
Tongue mangled, Alice indicates these are the very sick. They need OUR help?
Still neon glows on brick, glows for years on brick dark with lack of sleep -

This is a NIGHTMARE! Suddenly, it seems, as if our recognition has pulled out
That thorn so Alice could go further, guide us, instruct us in humanity, explain
How we could help, make public, and protest against, this. Laughter, and hope,
Would quicken the dead, abandoned, unreported human sick, and then

The moon would be rosy-haloed, the black heavens brilliantly ablaze!

Funny, things change as oddly as temperature and humidity changes causing thick dark fogs to disappear, magically the quality of sunlight is enriched, air made transparent.

Ready-made short-cut cliches conceal what’s really
happening: listen to the mad! It’d be like giving
dark expensive chocolates, gift-box lit
By sun-shafts, to those poor sods (like me)
unheard for decades! Dark energies seething in the trap
Called my skull. How all us insane, eyes glinting, would
Love being given a hearing!

Choices: uncomprehending stares can still be given from
behind square-mesh-wire-threaded glass,
Smiles brutally switch off in still-being-seen-split-seconds, and
Explanations met offensively, by shouts of “WHAT?”

Don’t assume you know this! Don’t stop
Us half-way, while other people’s
Thoughts and eyes tap onto Favourites instead, deafing out
What’s being said, unfinished, so

We plummet into kerb-meets-tarmac crevices, are lost, all over again
In darkness, cyberspace. Hope is walking the kids to school
And noticing a defiant tiny pansy, also called Heartsease, sucking
Rain and dirt, with hair-fine roots, out of dirty bits of road fatigue:

Promising, it was to us because we’d noticed, loved it, pointing at it, talking.